The Enmeshed data model can be divided into three parts:

The following diagram gives you an overview of all the existing types and how they are connected to each other. The subsequent chapters describe these types in more detail.

At a first glance the amount of types is overwhelming. But in the following chapters all of them are explained in detail.

Transport types like RelationshipTemplate, Token or File are types that are “exchanged” between Identities via the Backbone. They are created and updated by the Transport Layer. In most cases they have a content property, which contains the actual payload that should be transferred between the Identities. This payload is being encrypted when it is sent to the Backbone, and decrypted by the other Identity when it is received. The following sections describe the different Transport types and their properties.

Tokens can be used to save arbitrary structured data on the Backbone, which is encrypted with a random symmetric key. You can then pass the ID of the Token, together with the random key, to another Identity, which can then retrieve the token and decrypt it, e.g. inside of a QR Code, which you send to the recipient via letter. Tokens can be handy in a lot of scenarios, for example:

A token has the following properties:

A Relationships between two Identities is the prerequisite for them to exchange Messages. If there is no Relationship, the Backbone blocks all Messages that are tried to be sent. This ensures that you only receive Messages from Identities you know, so you are protected from any harmful Messages like spam or phishing mails.

A Message is a piece of data that can be sent to one or more recipients. The sender is completely free in what the content of the Message looks like. Though in order to enable a normalized communication, Enmeshed defines some content structures for Messages, and in the future there will be more of those. Consider that the Enmeshed App only supports those normalized Message contents. Currently there are:

You can read more details about each of these in the corresponding sections of the “Content Types” chapter.

But if you are communicating with another Connector, feel free to settle on any content structure that fits your needs.

The Backbone allows you to upload files, which are saved as - you guessed it - Files.

A File further has its content, of course. But since this is not a JSON property, it is not included in this table. You can download the content of the File separately.

In addition to the types that are shared between Identities via the Backbone, there are certain types that only exist within one Identity. These types usually contain metadata about Content types that should not be transferred to other Identities. They are created and updated by the Consumption Layer.

Each of them further describes some sub types.

This chapter explains all of those types, together with their properties.

A Local Request contains the local metadata for a Request.

Depending on whether it is an incoming or an outgoing Request, there can be different statuses. The following state diagram shows which status exists in both cases and when there are transitions from one state to another: 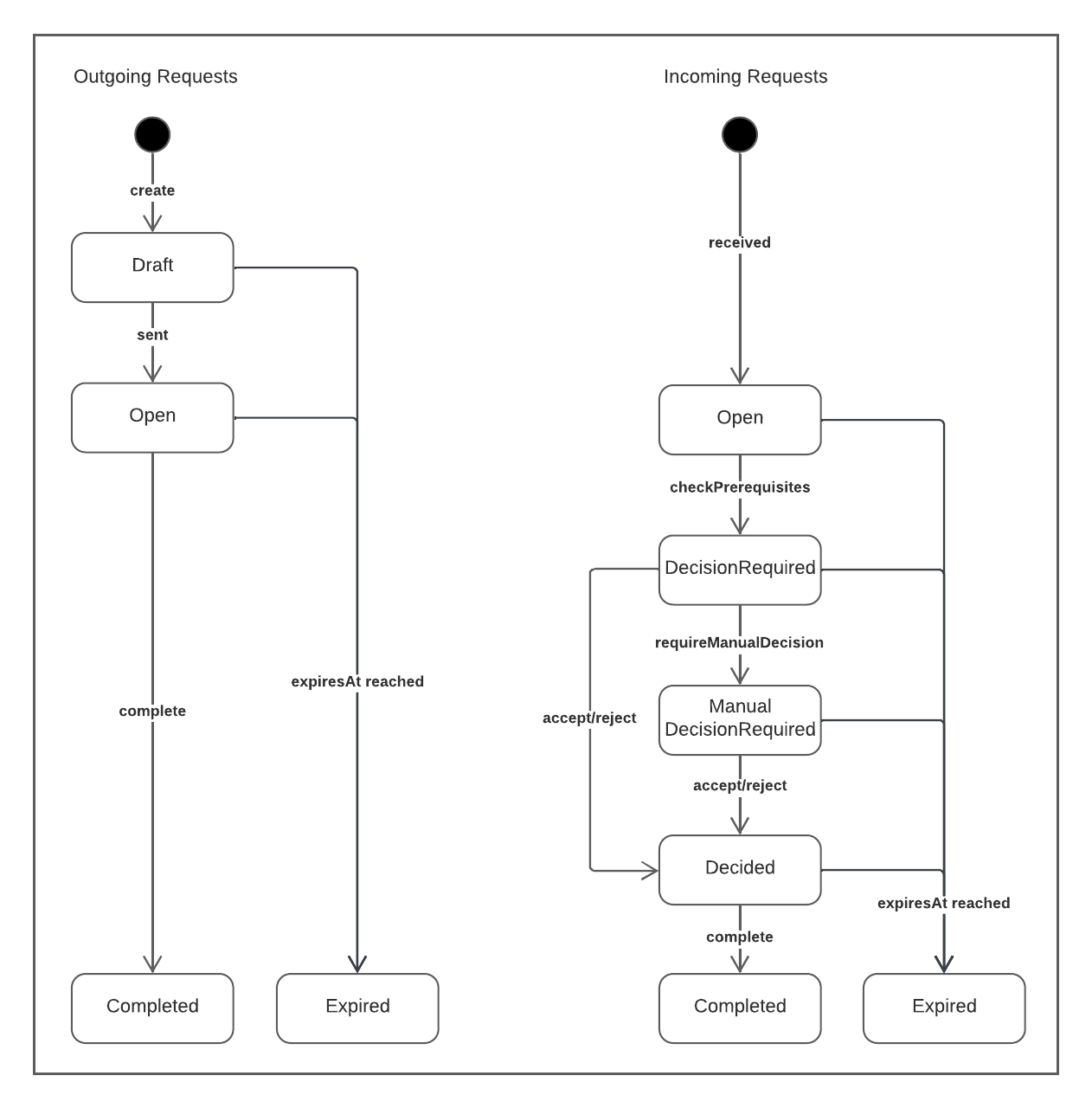 Draft
This status only exists for outgoing Requests. It means that the Local Request was created, but not yet sent.
Open
In case of an outgoing Request, Open means that the Request was sent. The transition to Open happens automatically when you send the Request with a Message.
In case of an incoming Request, Open means that the Local Request was received.
DecisionRequired
After the prerequisites of the Request and all of its Request Items were checked, a decision can be made. At first, the Decider Module tries to make an automatic decision. It therefore checks all LocalRequests in status DecisionRequired.
ManualDecisionRequired
If the Decider Module cannot make a decision, it moves the Local Request to ManualDecisionRequired. When the Local Request is in this status, it’s the User’s turn to decide whether they want to accept or reject the Request.
Decided
When the User or the Decider Module accepts or rejects the Request, the Response and ResponseItems are generated based on the passed parameters. This Response is saved in the response property of the LocalRequest, but not yet sent.
Completed
In case of an incoming Request, the Runtime Module listens to an Event saying that a Request moved to status Decided. It then checks on which way the Request was received (Message/RelationshipTemplate) and sends the Response on the corresponding way (by sending a message or creating a Relationship). After the Response was successfully sent, it moves the Local Request to Completed.
In case of an outgoing Request, the Runtime Module listens to the MessageReceivedEvent and checks the content of the sent Message for a Response. If there is one, it moves the corresponding Local Request to Completed.
Expired
When the timestamp in expiresAt of a Request is reached, the Request automatically moves to the status Expired.

With the information in this type you can clearly identify the Transport object the Request was sent/received in. Currently there are only two possibilities: Message and Relationship Template.

When a Local Request is decided/received, a Local Response is generated, which contains the Response, together with some metadata.

With the information in this type you can clearly identify the Transport object the Response was sent/received in. Currently there are only two possibilities: Message and Relationship Change.

A LocalAttributeListener is created when you accept an incoming Request with a RegisterAttributeListenerRequestItem. It is used to keep track of which Attribute Listeners currently exist and what they are listening for.

Content Types can be seen as a data contract between Identities. The medium through which this data is exchanged are the Transport types (e.g. Messages, Tokens, …). This chapter shows all the Content types and describes their intended usage.

A Request allows you to ask another Identity to do something. What this “something” is depends on which of the so called Request Items were added to the Request (e.g. CreateAttributeRequestItem, ReadAttributeRequestItem, …). The Request is then sent to the peer via Message or Relationship Template. The peer can then review the Request and decide whether they want to accept or reject it. And if they accept it, they can even choose which of the Items they want to accept. You can also put multiple Items into a group in order to ensure that they can only be accepted/rejected as a unit.

The base properties are:

There is a dedicated site that lists all available kinds of Request Items.

The site documenting the Request Items shows which Response Item is required for each Request Item.

The properties of the AcceptResponseItem are:

The properties of the RejectResponseItem are:

The ErrorResponseItem is only created by the Enmeshed Runtime, in case something happens which hinders you from further processing of the Request Item. It will never be created manually. The properties are:

Identity Attributes describe an Identity itself. Their values are strongly normalized. There is a list of available values here.

Relationship Attributes describe an Identity in the context of a Relationship. While there are some types that can be used as a value for a RelationshipAttribute, these types are rather generic (e.g. ProprietaryString, ProprietaryInteger, …).

One of the main features of Enmeshed is sharing Attributes. For this, an Identity either proactively sends its Attributes to a peer. Or, if let’s say a company wants to know the birth date of its customer, it can ask for it. Depending on the exact use case, the latter can be achieved with one of a bunch of Request Items, like for example a ReadAttributeRequestItem, or a CreateAttributeListenerRequestItem. All of them have in common that they define a query property, which contains either an IdentityAttributeQuery or a RelationshipAttributeQuery.

You can only query Identity Attributes owned by the recipient of the query.

There are cases in which you want to query some data from your peer that is not an Identity Attribute. An example for this is when an electricity provider asks for the electric meter number of a new customer. Since this information is only relevant in the context of the Relationship, an Identity Attribute wouldn’t make any sense here. That’s why you would send a RelationshipAttributeQuery. Its properties are:

Has the same properties as ValueHints, except that all of them are optional. This type is used for some Relationship Attribute values

A Mail can be sent as the content of a Message. It is comparable with the classic email, so its properties should not contain any surprise.